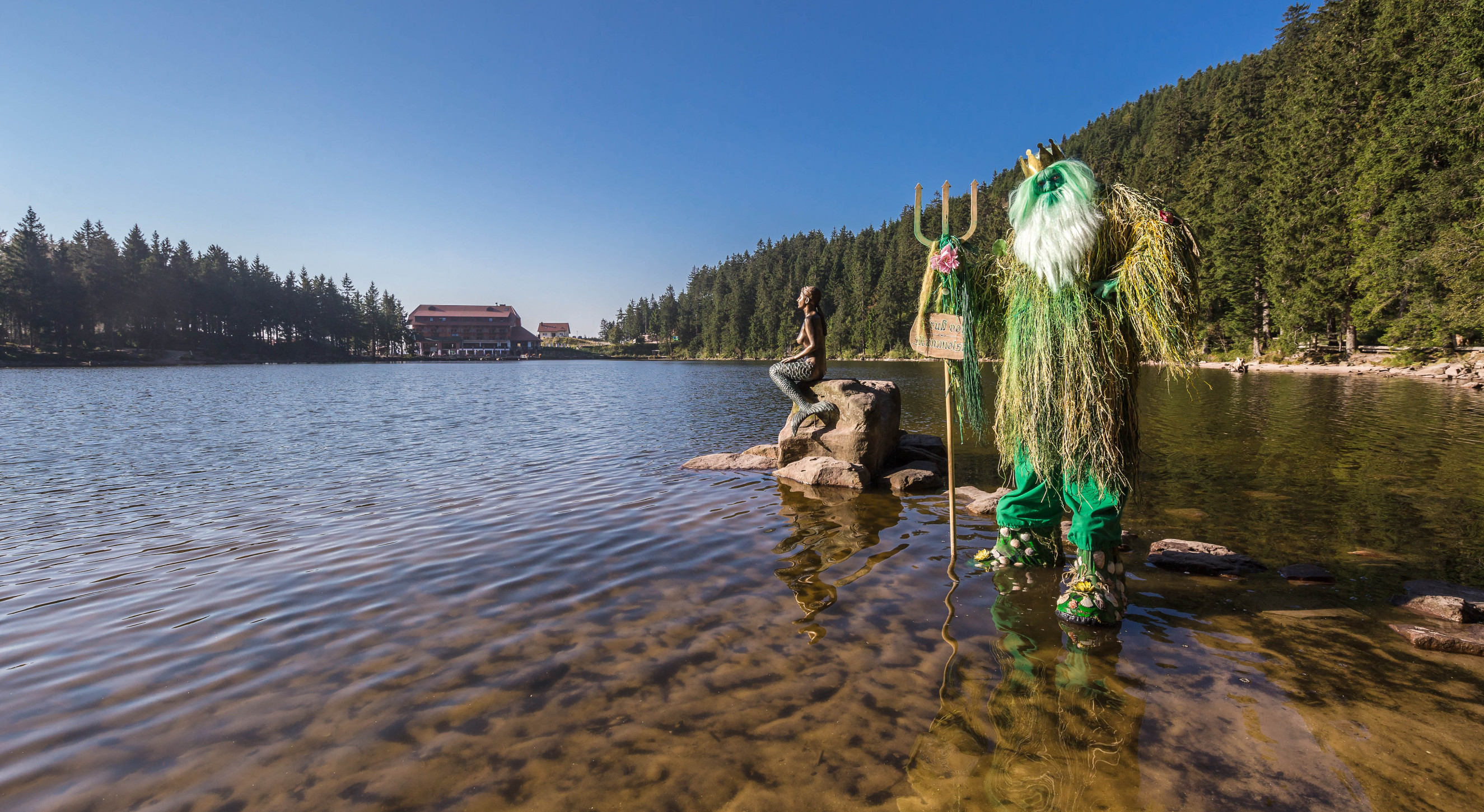 The Mummelsee, fantastically situated on the Black Forest High Road, is the largest of the seven remaining cirque lakes in the Black Forest. It is 3.7 hectares in size, has a circumference of about 800 meters, is 18 meters deep and lies at 1,036 meters above sea level. Incidentally, the name of the Mummelsee goes back to the white water lilies, which are popularly called "Mummeln".

The Mummelsee in the dark fir woods has its mysterious name from the lake damsels or Mümmlein. They live in its unfathomable depths in a magnificent, crystal castle. It is surrounded by magnificent gardens, where the blood-red coral grows next to the fragrant water lily. The little mummies are lovely, charming figures of delicate, slender growth and rosy beauty. Every night they rise to the surface of the dark waters, performing a lovely dance to the sound of instruments or hurrying with the spindle to the nearest houses in the valley.

Once upon a time, the Mümmlein often came down into the valley to the farmers and woodcutters, helped in house and yard or looked after the children when the women were busy in the fields. Early in the morning they were already there. But as soon as it was night and the stars were in the sky, they all had to be back in the crystal castle at the bottom of the lake. This was what they had been ordered to do by their king. One of the beautiful lake damsels became fond of a young farmer's son from Seebach. When the fair was again held in the valley, the mermaids came down to the inn where the dance was taking place. The little mouse, who was fond of the farmer's son, danced one dance after another with her beloved. There was no other girl as beautiful as the little mermaid, and none could dance so gracefully and easily.

When it began to darken, all the damsels from the lake returned to their crystal castle. Only the one mermaid, who had her beloved in the village, could not part with him. Only one more dance she wanted to do. She thought it would be night earlier down there in the valley than up in the forest. But she danced another round and another. And time passed, and she did not know how.

Suddenly it struck ten o'clock on the tower. Now the mermaid realized her carelessness. Her heart sank. And she pulled her beloved out of the hall into the open. Silently she hurried with him up the mountain forest. When they came to the lake, she spoke in a sad voice: "Now we will probably never see each other, because I will have to die. Wait a while longer on the shore. If blood rises from the depths, I have lost my life; if not, I shall soon be with you again." She took a willow rod and struck the water three times with it. The water parted and a marble-white staircase appeared, leading down into the crystal castle. Behind the little mill the water closed again. It was dark night, and no wave was moving. Then a small dark wave rose from the depths of the lake. It was the blood of the poor little mouse that had to die for his love.